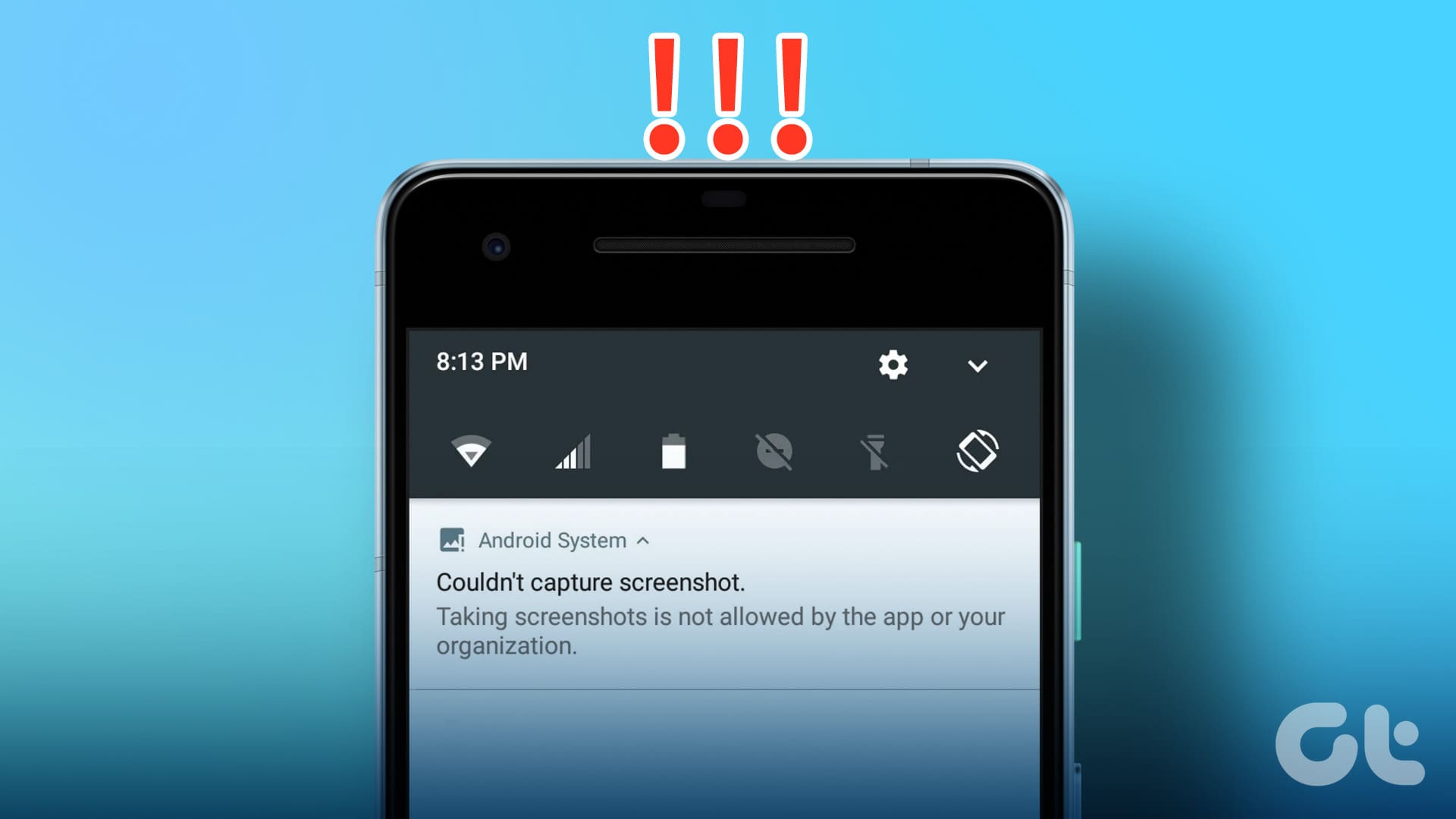 In this post, we’ve listed out some effective troubleshooting tips to fix the screenshots not working issue on Android. Let’s check some reasons why apps might not let you take screenshots.

Furthermore, popular streaming services like Netflix, Prime Video, and others disable screenshot functionality to prevent misuse of digital content. As a result, screenshots captured in those apps appear blank.

That said, if you cannot take a screenshot in any app, you may be experiencing a different problem. In that case, follow these troubleshooting tips to resolve the issue.

1. Use the Correct Key Combination

To begin, ensure you’re using the correct key combination to capture screenshots on your Android. After you’re on the screen that you want to capture, press the Power and Volume down buttons at the same time. You’ll hear a sound and see a preview of your screenshot.

This method works on almost all Android phones. However, if it does not work for you, resort to alternative methods to capture screenshots.

Using physical buttons isn’t the only way to capture screenshots on Android phones. You can also use Google Assistant or gestures to do the same.

On phones running stock Android,  you can use the Screenshot shortcut in the Recent Apps menu to capture a screenshot. 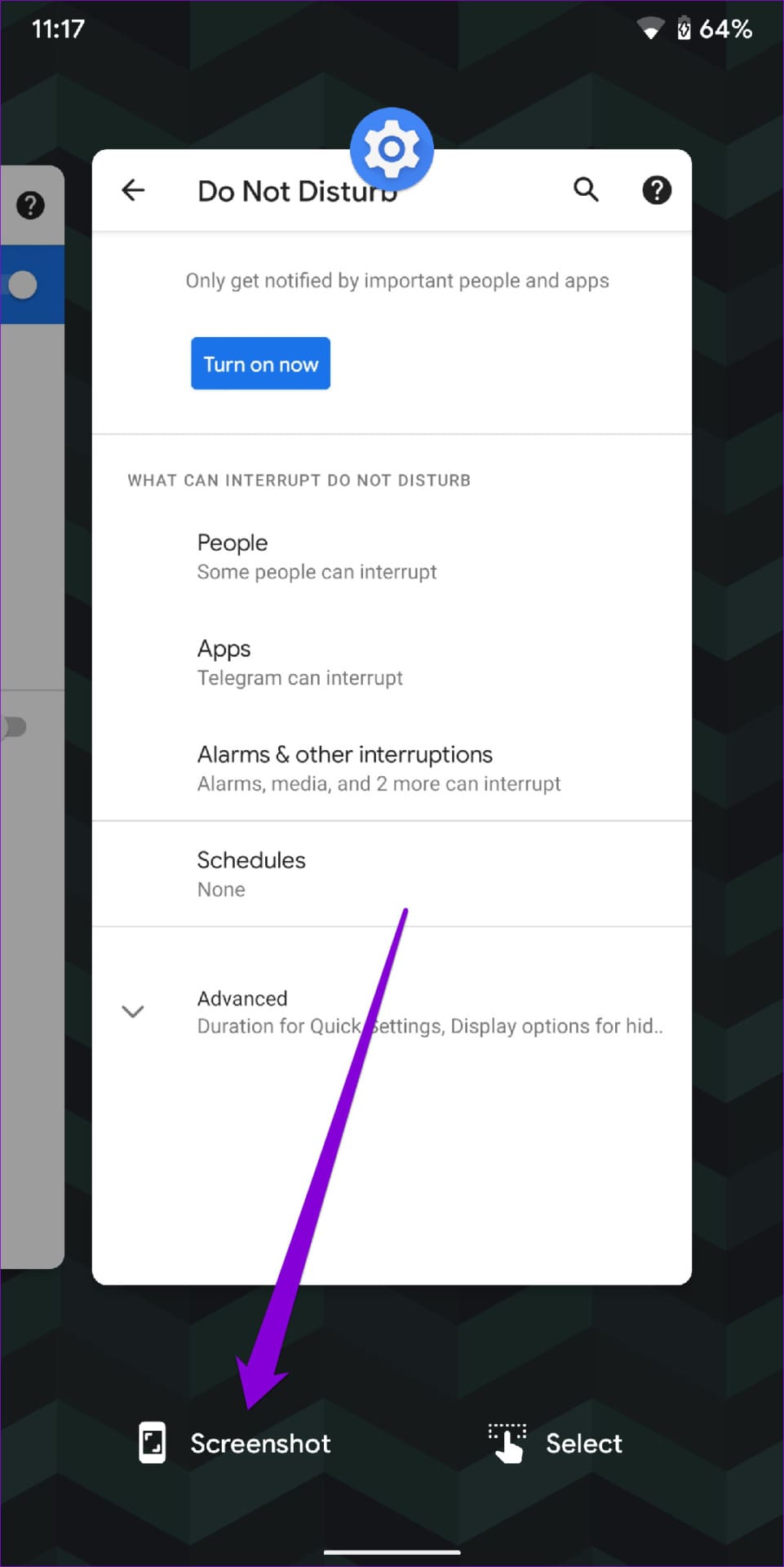 No luck? Don’t worry. We still have plenty more solutions for you.

Restarting your Android is a classic troubleshooting tip that takes care of any temporary glitches and gives the operating system a fresh start. So, if you cannot take screenshots even with the alternative methods, restart your phone.

Press and hold the Power button for a few seconds to reveal the power menu. Tap on Restart and try taking a screenshot after your phone reboots.

Is Android phone low on storage space? If so, you may see the ‘Can’t take screenshot due to limited storage space’ message on your screen.

Delete a few unnecessary apps or move some of your media files to the cloud to quickly free up storage space. Following that, you should be able to capture screenshots on your phone.

5. Enable File Access for Samsung Capture (For Samsung Phones Only)

Samsung Capture is a system app that allows you to capture screenshots and record the screen of your Samsung phone. If you have accidentally disabled file access for this app, you’ll see the ‘Unable to use Samsung capture’ error while taking screenshots.

Follow these steps to fix the ‘Unable to use Samsung capture’ error on your Samsung Galaxy phone.

Step 1: Open the Settings app and scroll down to tap on Apps.

Step 2: Tap the three-dot icon in the top-right corner and select Special access.

Step 4: Scroll down and enable the switch next to Samsung capture.

After this, you can take screenshots on your Samsung Galaxy phone.

When you boot your Android phone into Safe Mode, it runs only the necessary apps and services. This allows you to determine if a third-party app is causing the issue.

To boot your phone in Safe Mode, press and hold the power button until the power menu appears. Tap and hold the Power off option and tap the green checkmark to enter Safe Mode (only on Samsung phones).

Try taking a screenshot after your phone enters Safe Mode. If this method works, there’s a good chance that one of your third-party apps is to blame. Go through your recently installed apps and remove them one by one to resolve the issue.

It’s frustrating when taking screenshots is not possible on your Android phone. Hopefully, the solutions above help you fix any underlying issue, and you’re able to capture your phone’s screen.