The Amazon Echo Show 8 2nd Generation is a handy smart display. It’s small, and you can fit it anywhere, whether it’s a small nook on your window sill or your kitchen countertop. Or, like me, you can place it next to your laptop to monitor your smart home and listen to your favorite beats. However, if you use your Echo Show to watch shows on Prime and Netflix, a swivel stand for Echo Show 8 2nd generation will be your best buy. 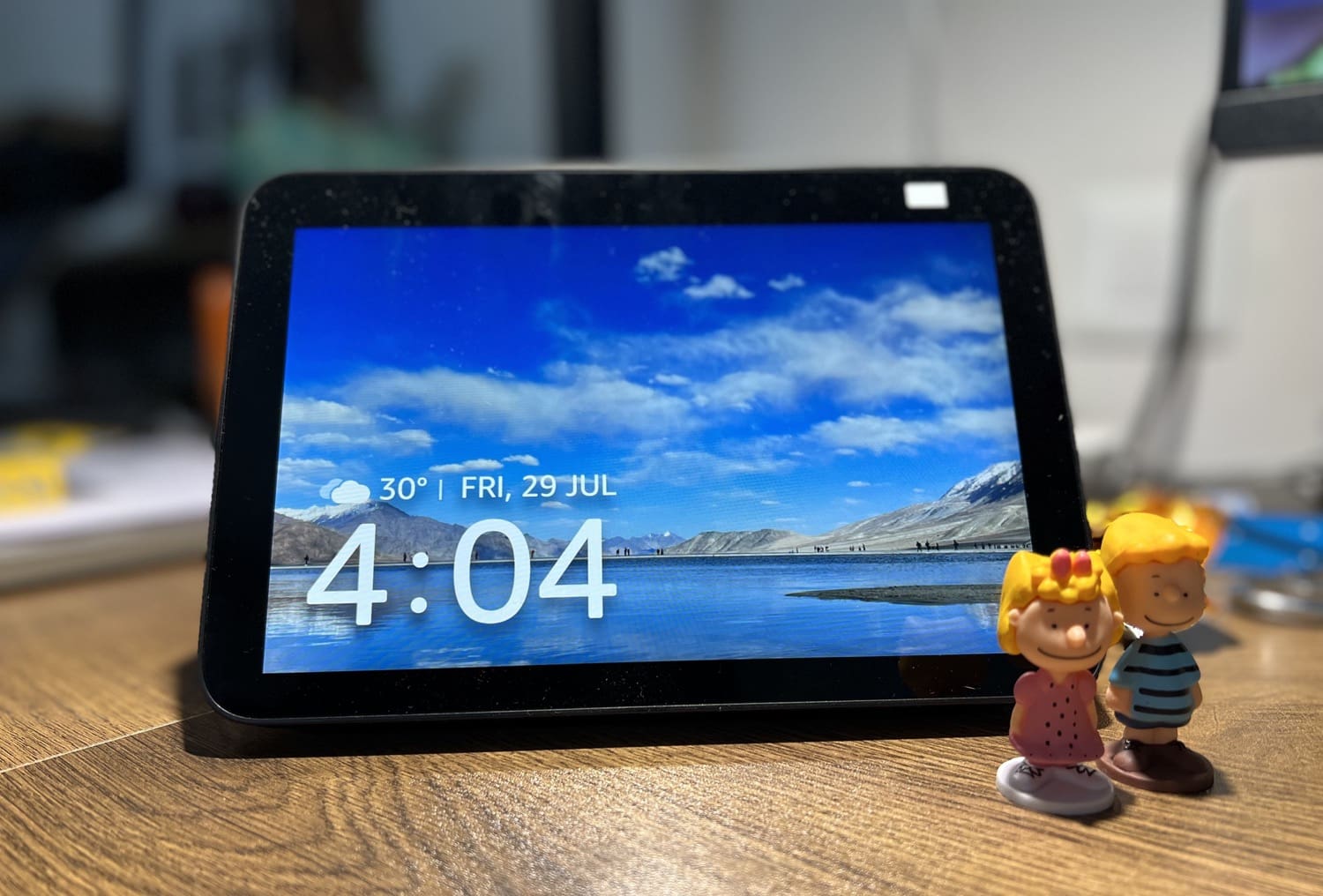 Swivel stands for the Echo Show are simple devices that attach to the bottom of the smart display. And as you may have already guessed, you will be able to swivel it on its base. Cool, right? Plus, the tilt function means you can adjust the camera for Zoom calls.

Besides that, a dedicated stand means that you can avoid issues like liquid spills. Plus, they raise the device to a better height.

So, what are we waiting for? Here are the best swivel stands for Echo Show 8 2nd Generation. But before that. have a look at these Alexa-related posts,

The YoFew Stand is one of the inexpensive stands on this list. This one has a simple design and comes with an easy installation process. All you need to do is place your Echo Show 8 on top of it. Moreover, the stand is flexible and offers a good range of motion. Apart from swiveling, you can also tilt and pivot the screen.

The good news is that it supports a full 360-degree swivel, which is great for its price point. At the same time, you can tilt the screen by around 20 degrees. Many users point out that the motions are smooth, and you can easily raise the height to watch Netflix shows.

The ELPHA stand falls in the same price bracket, and it brings a solid build to the table. For instance, the magnetic base ensures that the Echo Show stays put and doesn’t topple. It’s sleek and looks sharp. And yes, it supports a variety of motions like 360-degree swivel and tilt.

It’s a highly functional stand. Align the grooves and place the Echo on top of it. The magnet will do the rest of the job of holding it in place.

So far, it has managed to bring in a decent number of positive reviews, with users appreciating its smooth movements and the simple installation process.

The VMEI Metal Stand for Echo Show 8 is simple yet elegant. This metallic stand comes with a magnetic top. The rectangular base has a small footprint and doesn’t occupy much space. Also, the magnetic top ensures that the smart display stays put.

This stand comes with a ball and socket to help you rotate and tilt the display. While it gives you plenty of motion, it’s a little stiff, and you might have to spray a little WD40 to get it smooth. That said, it’s a sturdy stand with a smaller footprint.

The ATOPHK stand for the Echo Show take things to the next level. Not only is it sturdy, but it also comes with a range the motions. The latter means you can tilt or rotate the screen as per your preference. The cherry on the cake is the smooth movements. Several users echo this in their reviews on Amazon. It supports 360-degree rotation and 25-degree tilt.

The highlight of the ATOPHK stand is the magnets at the base that help to keep the Echo Show in position. You do not have to worry about it falling off, even when you accidentally brush your hands against it – magnetic force is strong with this one.

Unlike the one above, this stand for the Echo Show 8 is made of metal with a heavy base.

Last but not least, we have the AutoSonic adjustable stand. Unlike the one above, it doesn’t have magnets. Instead, it has a holder-like design to hold your Echo Show 8 in position. That said, it’s made of aluminum, and the smooth polish of the stand boosts its premium factor.

It allows you to raise the height of the Echo besides the standard swivel and tilt actions. That’s quite helpful when attending video calls on the Echo Show 8.

The AutoSonic Adjustable Stand is popular on Amazon and has received several positive reviews from its users. People love its sturdy design and the fact that you can angle it of your choice.

The 2nd generation of Echo Show 8 comes with a slew of features. And the fact that you can stream videos from the likes of Netflix, prime Video, and Hulu is the cherry on top. And when you do stream, you wouldn’t want to stay hunched and watch your favorite shows. Stands like the one above, not only gives a range of motion to the humble Echo Show 8 but also help to elevate its height to a viewable height.

You can also check out the in-house Amazon stand for the Echo Show 8. It doesn’t swivel, but you can adjust the height and tilt the screen.

So, which one of these will you buy?

In November 2017, an Amazon Echo device in Germany started playing music on its own at two in the morning.