It’s 2022, and smart home tech has made its way over to many common household appliances and devices, including ceiling fans. Smart ceiling fans are easy to control via voice and remote and save you from the hassle of getting up to switch the fan on or off. Besides that, the light on these fans also helps illuminate he space. Free two birds in one key, right? 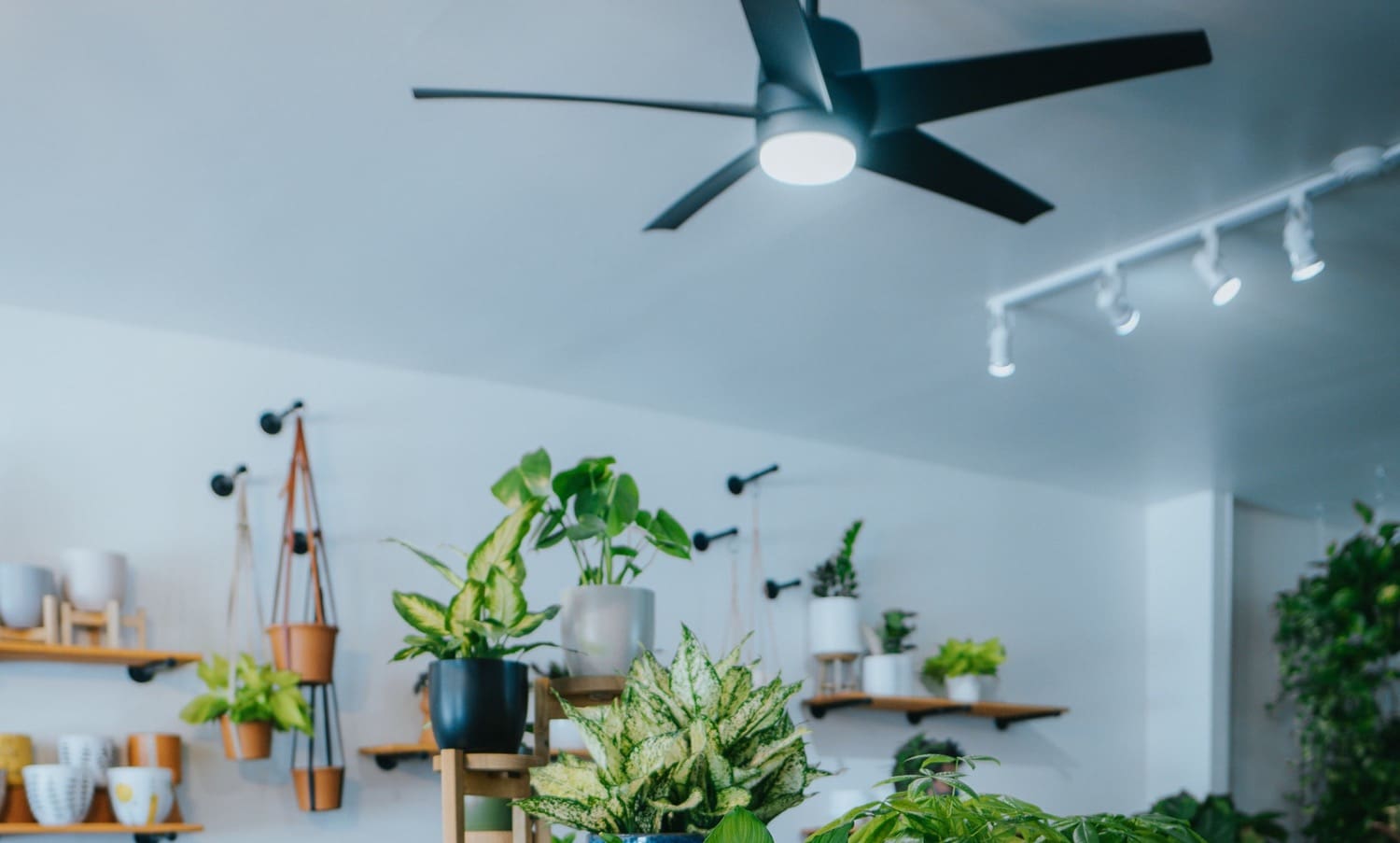 However, smart ceiling fans with light are expensive, and the best ones with Alexa or Google Assistant integration will set you back by several hundred bucks. Nevertheless, they play a huge role in simplifying your life.

So if you are up for it, here are some smart ceiling fans with light. But before that, take a look at these smart home gadgets,

The Hunter Symphony is a basic yet beautiful ceiling fan with LED lights and is compatible with Apple Homekit, Google Assistant, and Amazon Alexa. So you can pair it with your favorite digital assistant. Other than that, it is a standard 54-inch three-blade ceiling fan and comes in three finishes. The included LED lights are dimmable, and the remote is easy to use.

The remote ease plenty of things. Other than letting you control the fan speed and the light, you can also change the airflow directions depending on the weather. For now, the Hunter Symphony fan supports a counter-clockwise direction and direct downdraft.

The installation process is simple, and several users have observed this in their reviews. At the same time, the fan is not noisy and won’t drown your conversations even at high speed. The only downside is that the companion app is a little challenging to use. But once you pair the fan with your Alexa app or Google Home app, you’re least likely to face any issues.

Smaair’s ceiling fan is another smart option that supports Alexa, Google Assistant, and Apple Homekit. You get a remote to control the fan speed and the light’s brightness. Besides you can always use voice commands. The best part is that you can group multiple fans together for a single unified function. It is particularly important if you have a large hall and more than one fan.

Again, you can change the direction of the airflow as per your requirement. If you want a heavy draft during summer, all you need to do is press the button on the remote. This smart ceiling fan supports 10 fan wind speeds.

The fan is quiet and provides a steady breeze even at low speed. Several users praise how silent the fan is. However, the remote is a little challenging to pair, and you get just around a 10-minute window to pair it. After that, you’ll need to try again.

Lastly, if you are into non-flashy and minimalistic design, this Smaair ceiling fan will work for you.

The Minka Aire F844-DK sports a contemporary design with curved blades and a flowy design. This one is available in multiple finishes, and the light sits flush with the fan’s body – unlike the other two above. It packs 16-watt light bulbs which are dimmable. But, they are pretty harsh in at maximum brightness.

While it works with a remote, you will have to invest in an additional hub (Bond hub BD-1000) to make it compatible with Amazon Alexa or Google Assistant.

It features three airflow speeds and provides decent airflow at the maximum speed. However, the folks at The Spruce opine that some of its peers offer better airflow. On the upside, the Minka Aire F844-DK is energy efficient and uses just around 65 watts of power.

How does the idea of a 5-blade 60-inch fan sound to you? You may want to check out the Wynd smart ceiling fan. It comes with a massive 3500K LED light and is apt for large rooms that require bright light and air circulation. From the smart home perspective, it’s quite a versatile fan and supports several smart platforms, including Google Assistant, Amazon Alexa, Ecobee, and Samsung Smart Things. Cool, right?

Unlike the one above, it supports two distinct airflow modes for summer and winter. So if you want just the air to circulate (without freezing you), a simple press of the button will do the deed.

The Wynd ceiling fan is a tad more expensive than its counterparts above. But the good news is that it works as advertised and easily doubles as an indoor and outdoor fan. Note that the installation can be a bit challenging.

Haiku’s smart fans bundle a unique and elegant design, and it’s no different for the Hiku L series ceiling fans. The modern design ensures that it will sit well in most homes. Here too, the light sits flush against the fan’s body. The light is bright and provides light equal to a 60W light bulb. It has a companion app and is also compatible with Alexa and Google Assistant.

Setup and installation are straightforward. The best thing is that the company includes a handy instruction manual, as per the folks at Smart Home Solver.

This smart ceiling fan is the most expensive item on this list. It bundles additional sensors for measuring the humidity, temperature, and motions. And you can program it to turn on automatically when it senses movements or when the room’s temperature elevates over the threshold limit. Indigenous, right?

The Haiku L also features dimmable lights. And as you may have expected, the glow is super bright in its maximum setting.

Despite its steep pricing, it has amassed many positive reviews. Users love its air circulation power, energy efficiency, and low noise levels.

These were some of the smart ceiling fans with lights. The idea is to get a fan that brings the best of both worlds, like the one from Wynd. It should include the basic smart features, provide enough air circulation and not cost a kidney.