The winter season is almost upon us, which means months of dry weather eventually translate into blocked throats, nasal cavities, and dry eyes. Humidifiers tend to solve this problem by adding moisture to the air. However, if you have a big room, a small humidifier won’t be able to cover the whole area. Worry not, for there are humidifiers for large rooms. 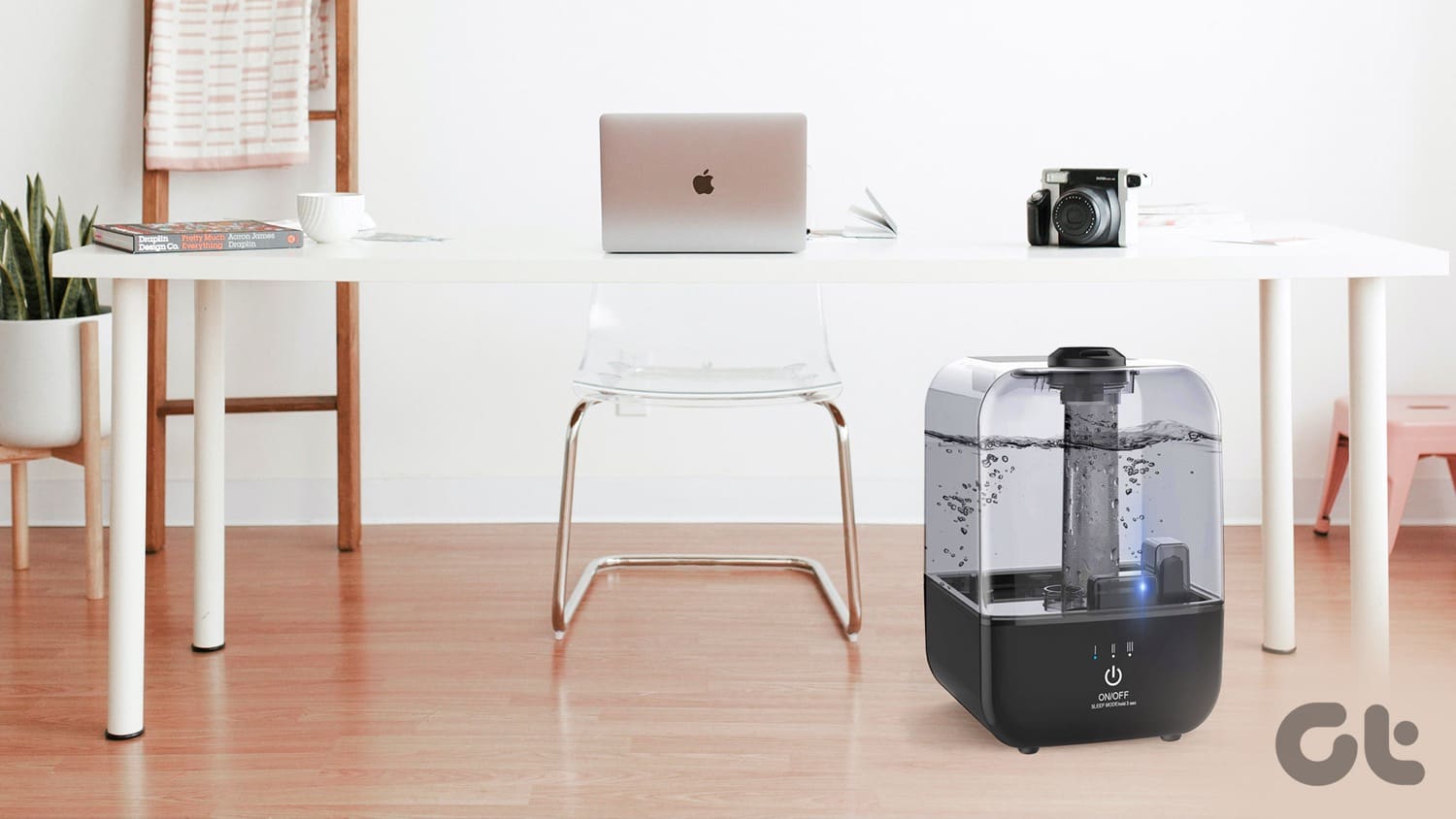 For a humidifier for a big room, you need to keep certain things in mind. For one, you will have to check the water capacity and the misting strength. And even if the tank capacity is on a higher scale, a subdued listing strength won’t do you any good.

We have done the legwork and have compiled a list of the best humidifiers for large rooms.  But first,

Mikikin’s humidifier is one of the most affordable devices on this list. It’s a tall and rectangular device, and you will need considerable space to keep it. That said, you can fill the water from the top, and it can hold up to 4.5 liters of water. Despite the affordable price tag, it has several nifty features. The nozzle rotates 360-degrees to ensure that the areas around are misted.

Secondly, the misting strength is robust even on the minimum levels. Mikikin gives you three levels to pick from, including a dedicated night mode. The best part about this humidifier is its silent nature and several users have spoken highly of it. It runs silently and won’t distract you while sleeping or working. Plus, the robust strength ensures that your room is sufficiently humidified.

It’s a popular humidifier on Amazon, and users love its silent functioning and easy-to-use nature. All you need to do is fill it with water and connect the power cable. You can also add your choice of aroma to the tray below.

The Mikikin humidifier has limitations. For one, you will have to be utterly careful of the water. You can either use distilled or soft water. Hard water leaves ugly white marks on the water tank. Secondly, the base is sensitive to water.

Levoit is a good name among home appliances makers, and the Levoit LV600HH humidifier is no exception. Compared to the one above, this one has better controls. The remote makes it convenient to control it from afar, especially at night. It has a 6-liter capacity tank and can cover over 700 square feet. Interestingly, you can monitor the humidity levels.

For those unaware, the humidity in a room should be between 30% and 40%, and this monitor helps understand the level of the same. You can turn off the device when it reaches the limit.

Again, like the one above, you have to use distilled water, lest you want the white marks of hard water to show through the tank. That said, it’s easy to clean with a gentle soap solution. Plus, it’s easy to fill. Be careful not to wet the lower portion.

The best part is that it’s a quiet device and doesn’t make much noise, especially in the cool mist mode. Speaking of modes this Levoit humidifier for big rooms lets you experiment with a handful of them. Interestingly, there’s a warm mode as well. And if you want to experiment with aromatherapy, there’s a way for that also. All you need to do is pull out the tray in the bottom and put a few drops of essential oil, and the diffuser will do the rest of the job for you. Cool, right?

For the price, it’s a decent humidifier to buy especially considering its reliable and impressive performance.

Another humidifier that comes with a monitor is the one by HuPro. Compared to the ones above, it boasts a cool and sharp look. You won’t be able to see the water in the tank. Instead, it boasts a brushed metal exterior that gives it a premium look. The monitor at the front lets you control the device and adjust the timer and humidity levels. Did we mention that it has touch-based buttons and a remote?

The remote makes it easy to control the humidifier from afar. While its water capacity is a tad on the lower side, it can cover rooms up to 400 square feet. Of course, you will have to ensure that it sits in a place with airflow.

This HuPro humidifier shares quite a few features with its counterparts. It comes with a 360-degree nozzle and five misting levels. The Auto-mode regulates the humidity level as needed. And the remote makes controlling it easy and simple.

So far, it has managed to climb up the popularity ladder. Users have spoken highly of its easy-to-fill tank and that it works as intended. The water tank detaches from the device. You can carry it to the sink and fill it up.

If you have an open-plan house, then the Aircare MA1201 will be the best pick. This one can cover 3,600 square feet and delivers an impressive performance. It has a massive capacity of 13.62 liters and lets you select the humidity level. More importantly, it can cover a huge area and maintain moisture in the air.

For one, there are three modes. Secondly, you can select the humidity level and the fan speed. The good thing is that it works well even in low fan settings. Filling up the tank is easy. You will need to carry it to a sink and fill it from the top. A full tank almost yields a runtime of 36 hours. But that will vary depending on the mode and the fan speed.

Compared to the one above, the working of the Aircare MA1201 is a tad different. It comes with a filter (called a wick) that helps to remove the build up of water sediments and, in the process, eases the cleaning process. Unlike the ones above, it doesn’t give out a mist of sir. Rather, the humidified air goes out through the vents at the bottom. However, the wick is a little expensive and costs $20.

Another addition is the in-house anti-bacterial formula which you will need to add to the water tank to prevent the build up of bacteria and mold.

The folks at The Spruce tested this humidifier and found it to work as advertised. It could humidity a large area without any issues. Of course, you will need to keep airflow in mind while placing it. Secondly, refilling the water take was not a big deal, and it fits easily into an average-depth kitchen sink.

But at the end of the day, the Aircare MA1201 is a bulky device and occupies considerable space. If that’s not much of a concern, this is one of the best humidifiers for large rooms.

Another humidifier for large rooms is the one by Venta. The Venta LW25 may not cover a large area like the AirCare product, but it can safely cover rooms as big as 400 square feet. The highlight of this appliance is that it doubles as an air purifier (see best air purifiers). Unlike some of the humidifiers above, it doesn’t use the misting method to humidify the air, and nor does it use a wick or a filter to clean the air.

The Venta Airwasher instead uses a sophisticated method of trapping the air around it and passing it through the water. It then passes the purified and humidified air through the base. Since it doesn’t ‘throw’ mist, this one doesn’t cover as big an area as the AirCare humidifier. And the 400 square feet capacity is more than enough for bigger rooms.

It’s quiet, especially in the low mode. However, the high mode does produce some noise. It’s big and bulky, but the good news is that it’s easy to clean. Since there’s no filter, there’s no extra cost involved in buying filters.

The Venta LW25 has a capacity of 7.6 liters, and if you plan to run it the whole day, you may need to refill the water in between. That said, it’s a popular choice on amazon, and users love that it’s easy to clean and that it isn’t noisy. However, if it sits too long without running, you may need to add water treatment additives.

These were some of the best humidifiers for large rooms. When running a humidifier, note that the humidity levels in a room shouldn’t exceed 40%. At the same time, do make it a point to clean the insides of the humidifier regularly before they become the breeding grounds for algae, germs, and bacteria.

India is one of the largest active user bases on WhatsApp.