Promoted: This is a sponsored post on which the Bluetti and Guiding Tech Editorial teams worked together 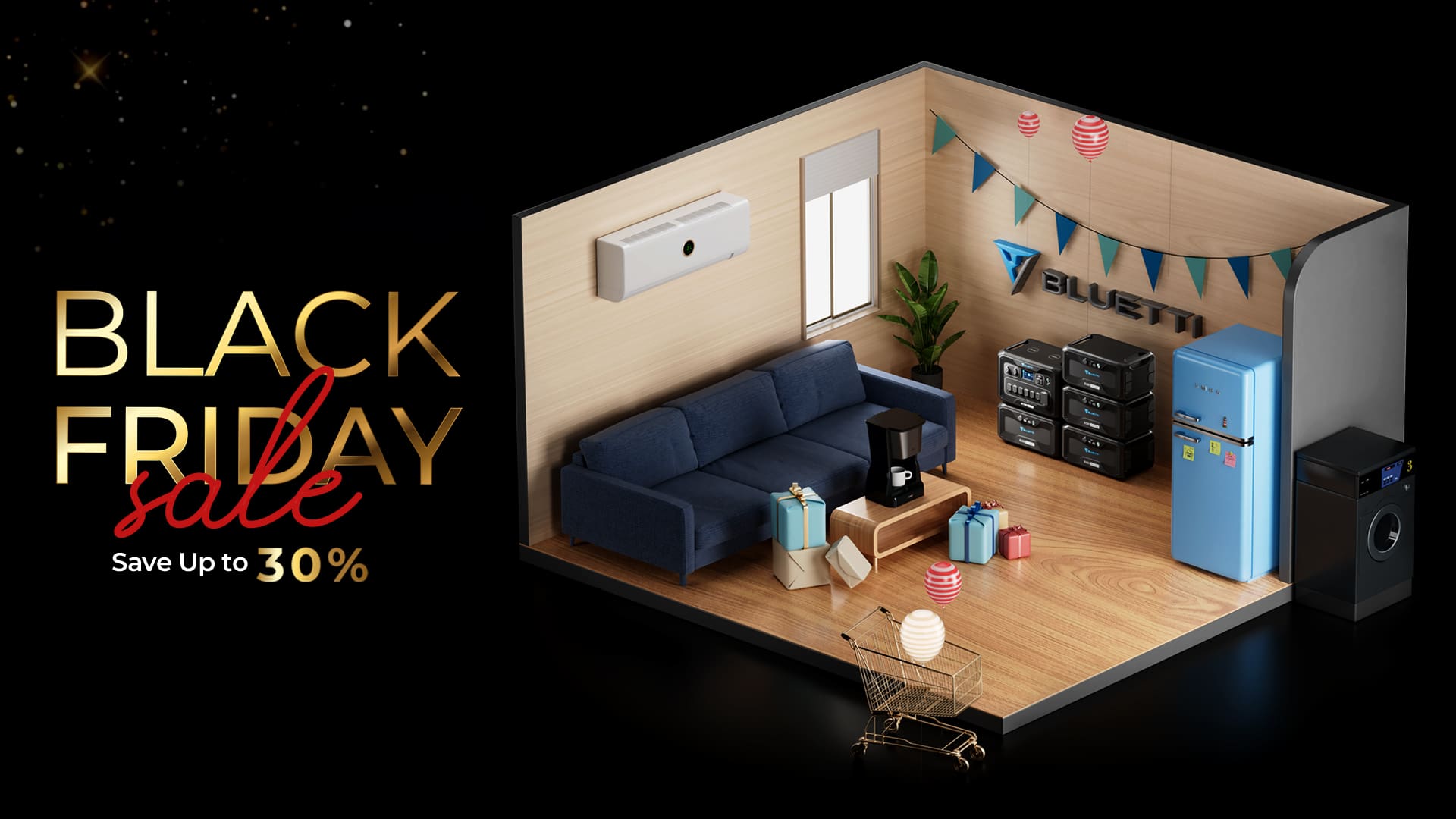 The best part about the Bluetti power generators is their modular design. And this means you can pair them with extension batteries to boost the power output, making your cross-country drive or camping adventures hassle-free. And most of these generators support solar recharge.

So, if you have been eyeing a portable generator or solar panels, you must check out the Bluetti Black Friday deals.

The AC500 is one of the newest power generators from Bluetti. It packs a power capacity of 5000W, and you can add modular battery packs to increase its cumulative power. The inverter delivers a continuous power of 5000W and a surge of 10000W, thus letting you run your house-households without breaking a sweat.

Another power station you can see this Black Friday is the Bluetti AC300 & B300 combo. Like the one above, it’s a modular power station with a 3,000W inverter. Plus, you can connect it to four other 3,072Wh B300 battery packs. The resulting power allows you to run demanding electronics like mini-fridge, fans, or washing machines.

The Bluetti AC300 can run a 700W fridge for approximately 3.7 hours and a 500W washer for 5.2 hours. Plus, the compact and lightweight form factor (for a generator) makes them easy to carry on RVs.

At the same time, it supports Wi-Fi and has a neat companion app. Interestingly, it bundles 16 output ports and includes six AC outlets, a 30A outlet, and USB-A and USB-C ports.

If you want a home battery backup system to power your essential home appliances during power cuts, the AC200MAX proves to be the perfect buy. It comes bundled with a 2,048Wh LiFePO4 battery and can connect to two B230 battery packs. At the same time, the inverter allows 2,200W of continuous power.

The cumulative power of 6,144Wh ensures that you can run laptops, smartphones, mini-fridges, and microwave ovens for a long time. The good thing is that you can monitor the power consumption via the companion Bluetti app. Moreover, the touch-based interface is easy to operate.

It comes with 16 outlets and supports a bunch of recharging techniques, including AC recharging, car recharging, and via solar panels.

The AC200P is a beefy 2,000W portable power station and can easily run your office appliances like printers and laptops. The compact form factor lets you carry it to the park or on short camping trips. Like its counterparts above, it is based on a LiFePO4 battery. The 2,000W inverter can deliver up to 4,800W if you use it as an emergency backup.

It’s a modular power station and pairs with other B230 or B300 battery packs. The variety of ports makes it highly versatile across conventional and modern appliances. Recharging is simple, and you can use solar and AC power to top up the battery. Did you know that the AC200P power station supports 7 different recharging techniques?

If you need a power station to act as a backup during storms and hurricanes, you can trust the duo of EP500 and EP500Pro for the job. The duo boasts a power of 2,000W and 3,000W, respectively. They can power your household items easily. At the same time, it can also function as a UPS since it can integrate into your house’s power and act as a backup.

The only downside is the size. The EP500 and the EP500Pro are less compact than their counterparts above. However, the wheels at the bottom let you move them around easily.

When it comes to driving around the power, you can do so by combining two identical units of the EP500 series.

The Bluetti EB series is a must-have for campers and adventure seekers for its portable design. For one, they support solar charging and come packed with a wireless pad at the top to ease the process of charging smartphones, earphones, and other compatible devices. And the Bluetti EB55 is no different. This compact power station has a 700W battery and its power peaks at 1,400W.

It’s a versatile power station and bundles 13 output options. It comes with a USB-C PD and 4 USB-A ports,  and you can recharge your phones and laptop without breaking a sweat. Theoretically, the 537Wh battery can refuel a standard phone 45 times and a standard laptop 7 times.

Another cool Bluetti Black Friday deal is on the EB70S power station. It’s an 800W power station and comes bundled with a combination of both AC and DC outlets. It’s easy to carry around and can be safely tucked into your car boot or in the corner of your RV.

Like its counterparts above, it packs several ports and can charge up to 13 devices. Do not let the small form factor deter you from buying this EB power station. It’s powerful for its size and price. For instance, it can power a 75W television or a 90W mini fridge for over 6 hours. Just make sure that it’s fully charged, and you will be in the clear.

The EB70S retails at $599, and you can save $100 during this Black Friday sale. Besides the above, Bluetti has a range of exciting deals on its solar panels.

Grab the Deals While They Are Hot!

The Bluetti Black Friday sale starts on November 11 and will continue till November 29. You can check out other deals and exciting gifts on their official site.

You can buy one of the mystery boxes (Basic, Pro, and Premium) and get a random Bluetti product.