It’s only a month since Google Plus was launched but the charts of its growth and popularity are rising exponentially. Still in invite only beta phase, it has managed to win the hearts of a huge number of people through innovation in sharing and communication.

Though most loved Google Plus, many still favor good ol’ Facebook and Twitter over the former. If you have already moved to Google Plus but don’t want your friends on Twitter and Facebook to be left out of your updates then SGPlus for Chrome can help you.

SGPlus is a nifty Chrome extension to merge all your daily dose of social networking at one place. It brings the control to update your Facebook and Twitter timeline right through Google Plus thus saving you from the trouble of updating each one individually.

Step1: Download and install from Chrome web store. Once the extension is installed successfully you will notice an orange colored shutdown icon on the Google Toolbar on G+. It’s the SGPlus config button. 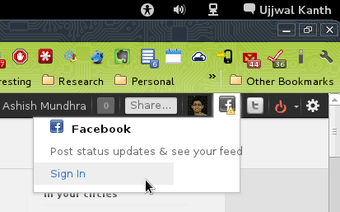 Step 3: Once you have authenticated your accounts you are all set. Next time when you are selecting the circles for your G+ status update, you can select the Facebook and Twitter share options too from within the share window.

Step 4:Now every time you update your G+ stream, SGPlus will update your Facebook and Twitter timeline for you.

Most of my friends have moved to Google Plus but still prefer Facebook or Twitter over it. This makes it difficult for me to reach all of them as updating timeline of all the services is out of scope. Like me, if you don’t want any of your friends to be left out, then you may use SGPlus too. Of course, only Chrome users among you qualify. 🙂