The latest Samsung smartphone to enter the Indian market is the Samsung Galaxy J7 Max. Touted as a budget smartphone, this one is priced at just Rs. 17900 and is promoted as a Make in India phone.

The device landed in our office on the day of its launch and since then we have been putting it under stress and thorough tests to check whether the Galaxy J7 Max is worth its mettle.

So, let’s see how the Samsung Galaxy J7 Max fares for a budget device.

The design of the Samsung Galaxy J7 Max can at best be compared to the Galaxy J7 Prime, sans the width. The Galaxy J7 Max sports a 5.7-inch glass and metal look with an all-metal unibody design. You won’t find any visible antenna lines on the rear or the edge of the phone. But if you ask me, the squarish corners end up giving the phone an average look.

Speaking of the design, you’ll find the power button on the right with the speaker grills just a tad above it. The volume rockers are on the left edge along with the hybrid SIM tray and a separate slot for the memory card. This is a welcome feature since in most of the phones — even the premium ones — one can either use both the dual SIM slots or a SIM and a memory card.

The micro-USB charging port is at the bottom flanked on one side by the 3.5 mm headphone jack. Given that the world is moving towards USB Type-C charging ports, it would have been great if the same was included in the Galaxy J7 Max as well.

On the rear, you’ll find the primary camera and a LED based Smart Glow circling the camera and the single-tone LED flash next to it. Speaking of flash, the front camera is also accompanied by a single tone flash, thus giving the front a neatly organized look. 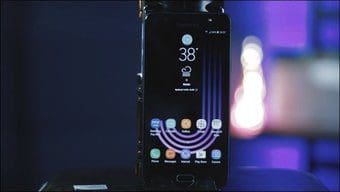 However, the Samsung Galaxy J7 Max isn’t protected by Gorilla glass, so you might want to get a tough outer case or a tempered glass to keep it shielded from accidental falls and drops. Though it’s only a few millimeters thicker than the Galaxy C7 Pro, the one-handed mode is a tad less accessible due to its width of 78.8 mm.

Overall, in terms of design, the Galaxy J7 Max looks average and there aren’t any specific features which will set it apart from the other budget J-series devices.

The Samsung Galaxy J7 bundles in a 5.7-inch FHD TFT display. Although it doesn’t sport the Samsung famous AMOLED display, that doesn’t deter the Galaxy J7 Max from turning out a crisp, sharp and vivid display. Even the bezels are minimal thus giving it a streamlined look.

If I were to compare the display with an AMOLED phone, the J7 Max is only a tad less bright. However, it’s under harsh or bright sunlight that the display takes a hit. In full brightness (under the sun), I found it a little difficult to navigate around the phone.

Speaking of the hardware, the Samsung Galaxy J7 Max is powered by a MediaTek octa-core processor which clocks at 1.6 GHz. It packs in 4GB of RAM and 32 GB of built-in storage expandable through a microSD card up to 256 GB.

More on the hardware side, we have the home button which doubles up as the fingerprint sensor. The sensor has a decent turnaround time and responds well to touch. And the same can be said of the touch screen as well, it feels soft to touch and isn’t too slippery.

Speaking of performance, I haven’t yet encountered any jitters or lags and it has managed to pull off every task with ease. Even when the Galaxy J7 Max was put through the intense GT Gaming review, we didn’t encounter any unnatural heating or stalling.

The only place where we did encounter a noticeable lag was in Asphalt 8, in the highest graphics settings.

This isn’t the first time that a lag is encountered on a MediaTek device as Asphalt is known to have optimization issues with the chipset.

The only thing missing on the hardware aspect is NFC. Given that many tasks can be automated with the help of NFC tags and the transfer of files and photos can also be quickened, it would have been great to have it around.

On the software end, we have the latest version of Android on the Samsung Galaxy J7 Max — Android Nougat. With the influx of Android Marshmallow on most of the budget devices this year, this move is more than welcome.

Like most of the Samsung devices, we have the in-house Samsung TouchWiz running on top of Android.

Samsung Pay Mini is a scaled down feature of Samsung Pay. It won’t allow you to add your credit and debit cards but will act as a comprehensive platform from where you can make e-wallets and UPI payments.

Lastly, on the security front, the Galaxy J7 Max is protected by Samsung’s very own Knox which provides chip-level encryption. What’s more, the security patches are also the latest — May 2017.

Good news for the selfie lovers as both the cameras are accompanied by a single tone flash. So, no more dark selfies.

This low aperture value plays a very important part in turning out cool pictures with great detailing and color reproductions. But then, the camera is ultra sensitive and even the tiniest amount of movement can result in blurred pictures. Here are a few pictures which were taken with the Samsung J7 Max.

Moving on to the video, the J7 Max camera can record FHD videos at 30FPS. However, since it lacks both the EIS and OIS stabilization, the videos come out a bit shaky. So you might want to use a tripod in case you lack a stable hand for recording videos.

All in all, the J7 Max camera will whip up beautiful pictures only if you are careful with it. Besides, you get the cool feature of sharing pictures in the social media or your contacts as you click them. Plus, there’s an awesome set of stickers to spice up your selfies.

For a More Detailed Camera Review, Check out our Video on This,

The battery is one of the driving forces behind any smartphone. A phone with superb features can be ruined by a poor battery life, take the OnePlus 3/3T for example.

The Galaxy J7 Max is powered by a 3300mAh non-removable built to see through an entire day and more in the case of casual use or a day at max in the case of heavy usage.

The built-in battery optimization plays a great role in maximizing the battery in the J7 Max. Overall, it does provide an awesome battery life and left me quite impressed with its performance. The above screenshots should hold true to my statement.

If you see the screenshot above, it lasted easily through a day and still has 35% of its power left. In this entire duration, I had YouTube on for a full hour which attributed to only 12% decline in the battery.

The catch to this awesome battery performance is in the form of charging. The Samsung Galaxy J7 Max supports neither Quick Charge nor Fast Charge. So you’ll have to dedicate around 2.5-3 hours to charge to its full capacity.

But given the good battery life, I’d say it’s a win-win.

Also See: Here are all Qi Compatible Devices and a Wireless Fast Charger

Overall, the Samsung Galaxy J7 Max is a decent phone with a great battery life, new software version and an HD camera with a cool set of features. And if you were to take a look at the display, it isn’t too bad either. It’s the design that is a tad too common.

But for a phone priced at Rs. 17900, it’s a tad pricey given the strong competition in the Indian market with the influx of Oppo, Vivo and the revamped Nokia 6 in the same price bracket.

If you can look past the design, the Samsung Galaxy J7 Max is a decent entry, but hey, don’t forget to mount a protective armor.

The first Amazon Kindle sold out in less than six hours.