It’s the first of June and here we are, again, with the list of the Android apps which were released in the last couple of months. Surely, tracking each and every app isn’t easy and that’s why we have handpicked the best ones out there.

So, without further delay, let’s have a quick roundup of the top 10 new Android Apps for June 2017.

Also See: Here’s How You can Hide Apps on Android without Root

So you were in the middle of a video and a notification came in? So, either of the two scenarios occurs — the video stops playing or the audio goes mute for a few seconds. Wouldn’t it be awesome to have an app which mutes the notification sounds when not needed?

Say Hello to Dingless. Dingless, as suggestive of its name, makes the ding of notification sounds less annoying when you are using an app of your choice. 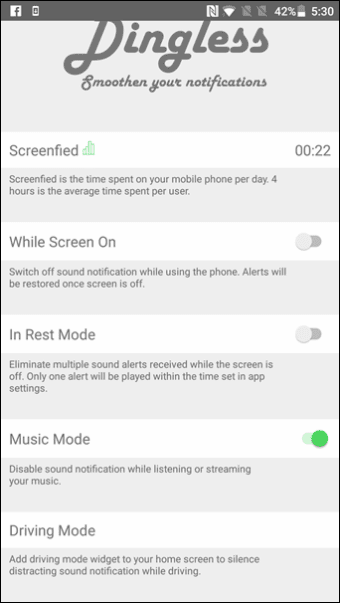 So whenever you’re listening to a song, watching a video or driving a car, rest assured that you won’t be jolted out of your zone. What’s more, there’s a rest mode which eliminates multiple sound alerts and replaces them with only one sound depending on the time set.

The app can be simply turned on/off from the notification shade and is free to install in the Play store with some in-app purchases.

Contextual apps are the rage these days, with their promise to complete tasks with the minimum of human interactions. Joining the race is Taskzy, the new tool for task automation.

The interface is simple — create an action for an appropriate situation. There are quite a handful of situations pre-loaded in the app. But if you wish to, situations can be created manually too. However, they need to be either from the following —

So the next time you want to launch Spotify when you are running, you can just set the ‘situation’ and the rest of the work will be done by Taskzy.

So for instance, if you want to switch off the mobile data, set the brightness to maximum and volume to zero when you launch Facebook — all of these will be taken care by Autoset in a jiffy.

Plus, you can also set schedules when your Android needs to disconnect from Wi-Fi or the Bluetooth. Say goodbye to manual intervention as you sit back and let Autoset automate everything. This app is priced at $1.48 at the Play store.

All you have to do is pull down the shade, choose the appropriate media and drag the pointer.

Not only the media volumes, this app also lets you adjust the sound levels for alarm, calls, ring, notifications and even Bluetooth.

By default, only three are enabled, however, you can go ahead and enable the whole lot of them. Plus, there are multiple themes to choose from in the settings menu.

Couchgram sports a lot of features like app lock, privacy screen filter or hide caller ID. But the feature that makes it unusual is the Incoming call lock.

Yep, the Couchgram app lets you password protect incoming calls so that when the phone falls into the wrong hands, they are not able to pick up the call. The incoming calls can be protected with a password, pattern, number or a special arrow lock.

It’s especially helpful when there’s a toddler around who makes it a point to run towards the phone as soon as it rings. This feature also has a bevy of other settings like unlock with fingerprint or use the lock mode for unknown numbers, etc, which you can also explore.

Not too long ago, the Moto G phones were accompanied by a cool range of gesture support which let you do cool stuff like launch an app or complete a task. DoubleHome is an app which tries to bring one of the features into its app — lock the Android’s screen just with a double-tap on the home button.

So the next time, you want to lock your phone, don’t reach for the power button yet. Instead, just double-tap on the home button. There are two sets of settings — you can either turn the screen Black (battery saver) or turn the screen off completely.

Looking for a new photo editor? Worry not, the Color Splash Snap Photo Effect app will have you covered. It contains around 10 splash effects in all shapes and sizes. And what makes it better is that you can adjust the splash size and shapes with just a simple touch, and also reverse the splash effect.

But what I liked the most is the ‘Fill’ feature. This feature smartly fills a few spots in the image with a single color and gives the rest a monochrome hue. The colors can be chosen from the pellet and result in absolutely stunning images.

Path Guide, from Microsoft Corporation, is a plug-and-play indoor navigation service which guides users to a destination using a path or a track created by an earlier traveler.

This app aids in locating a store inside a mall or a huge office. Plus, if your phone has a built-in barometer, it can sense the change in levels i.e. if you’re using stairs or escalator and make the changes accordingly in the trace.

If you are one who likes trying out new weather apps, then the Today Weather app is the perfect one to try out next. It lists a detailed description of the weather in your area along with moon cycles, air quality, and wind speed.

Plus, it also has a feature whereby you can see the predictions for the next 15 days. If you ask me, the ‘chance of rain‘ feature turn out to be quite effective in keeping hopes in check. Also, there’s a nice little picture to go with the prediction. Notice the desert picture for a temperature of 37-degree Celcius, above?

Today Weather also has a cool widget to go with your home screen. And yeah, you can select from where the weather data is sourced.

In April, we featured an app called Photomath which helped to solve math equations if the equation in question was uploaded. Socratic works by using the same principle, but it doesn’t just concentrate on Math alone — it covers a wide variety of subjects.

So, that was the list of the cool Android apps for the month of June. Do try them out and let us know which one of these made a permanent home on your phone.

Also See: 12 Awesome Android Games You Will Want to Play All The Time

WhatsApp is one of the most downloaded Android apps.