I know, I know Android O preview came up the other day and you must be wondering why I am pestering you with this article. Well, there’s still time for the official launch and the last time I checked, Android N’s distribution is roughly between 2%-3% worldwide. So, it just makes sense to know about Nougat before you can jump ship to Android O (did you just catch me winking?).

So, without further ado, let’s dive right into the 15 best Android Nougat features. You may already know a couple of these, but why take the chance and miss out an important one?

Also Read: 21 hidden Android features you might have missed

The showstopper for Android N — improved battery life. Building along the same lines, we have the battery power optimization option, which essentially means that an optimized app will cease eating battery juice when the phone is ideal.

The options can be found under the battery settings. Though few apps such as Facebook and Messenger continue to be huge guzzlers of battery juice even when optimized.

So, the new shopping app has been relentless in its display of discount coupons, right? While you can’t go ahead and ban the app (shopping is a therapy, remember?), this nifty little trick will take care of your hassles. The next time a notification arrives, long-press on it and tap on Block all notifications.

There’s also the prospect of making the notifications mellow down a bit through Show notification silently, instead of outright blocking them. If you want the same option for a different app, head over to Notifications and choose the required option.

For the folks who haven’t been blessed with an infinite data plan, you can heave a sigh of relief.

Nougat sports a built-in data saver feature which makes the apps use lesser data by limiting the background data usages.

Furthermore, it also informs apps to use less data on the foreground as well. This doesn’t necessarily mean that apps will completely stop using data but they will do so less frequently.

Agreed that the quick settings menu can turn out to be really helpful as it gets things done in a jiffy. Plus, it also lets you customize tiles as per your convenience. So if you don’t want the hotspot icon, you can easily swap it with a different one.

All you have to do is, tap on the edit icon on the upper right corner and the canvas will be laid out for you to experiment.

Did you know that the first five icons on the quick settings menu are the ones that are displayed in the quick-access menu? Well, now you know.

Nougat also comes packed with system UI tuner. Once it’s turned on, it opens a window of modifications. Among them, the power notification is quite a nifty feature. It lets you choose the priority of an app’s notification. The notification levels range from Level 1 through level 5, 5 being the most important. 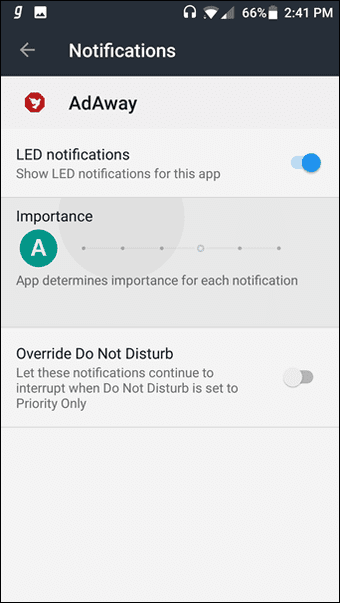 Once it’s enabled, you can see the same in the notification menu in settings. By default, the system determines the importance of the app, but it can be changed with just a single tap on the A icon.

In search of a clean notification drawer? Here’s an app that can help to do just that.

6. Copy-Paste in a Jiffy in Split Screen

Perhaps one of the most awaited features of Android N was the split screen mode for multitasking activities like comparing documents or using one window for reference while you type out an email. It can also be used to copy-paste text from one screen to the other or drag and drop items

Moreover, if you easily open a new Chrome window by dragging the already-opened window to the top. Once it’s settled there, tap on Move to other window under the three-dot menu.

Not necessarily a game in the true sense, if you ask me, I think it can be termed as a passive game which involves long hours of waiting for a cat to show up. Patience tester, perhaps?

To activate the game, tap three times on the Android version in Settings, which will bring up the Nougat logo. Tap a couple of times on it before holding it down till a tiny cat emoji appears at the bottom.

Edit the Quick settings menu and drag up the cat tile. Tap on the empty plate, select the bait and wait for the cat to show up.

It is sometimes quite a pain to peer into smaller fonts and displays. And the same holds true for the opposite as well, you wouldn’t want your messages to be visible to the whole world! So to set the DPI correctly, Nougat comes packed with a setting, which lets you choose the size with which you’re most comfortable.

Go to Settings > Display > Display Size and then use to slider to adjust the size. In the older versions of Android, this was only possible through ADB.

Popularly known as Pixel-like app shortcuts, this feature brings up the common options when you long-press on an app icon. For instance, a long press on YouTube would bring up the option for trending and subscriptions and a tap on it would take you directly to that page.

What’s more, you can even have the app shortcuts on your home screen. Long press on the shortcuts and drag them to the place of your choice.

Marshmallow users, get this feature with the help of Nova Launcher

Next time you peer into the share menu to find your favorite app, remember that Nougat has made things easier for you. All you have to do is pin the frequently used app at the top of the menu.

Just long-press on an icon and tap on Pin. This same can be done to pin WhatsApp and Messenger chats as well, provided the app allows it.

Marshmallow gave us the much-need file explorer and Nougat have taken it to the next level, to the extent that you can do away with third party file explorers.

This feature is buried deep inside Storage > Explore in the settings menu. For starters, you can copy/move items between the folders. Plus, there’s a new slide-in menu for the recent items as well.

For those many of us folks, who listen to music with just a single ear-bud, Nougat has some good news for us. This feature will make the right and left audio channels to play parallelly in both the earbuds. So, don’t miss out on the perfect chance to experience a song in all its glory.

The setting for this is hiding under the Accessibility settings. All you have to do is toggle the Mono audio playback option to On.

Lock screens are meant to pose as a barrier for unauthorized access. But this important feature can pose as a roadblock if your phone gets lost and it lands in the hands of a good Samaritan.

This will guide the helper with the right information so that the phone finds its way back to you. Nifty, noh?

Depending on the make of the phone, this feature can either be found under Settings > Users or under the security settings. OnePlus 3/3T users will have to make peace with only the emergency dialing option.

14.  View Shortcuts with a Physical Keyboard

The last feature is for the tablet users. With the latest Nougat update in place, you will be able to have a quick glance on the keyboard shortcuts.

All you have to do is press ALT+/ and the list will pop up.

Some in-house apps have their own set of keyboard shortcuts. So the next time you connect a keyboard, be sure to try out this amazing feature.

Wondering about the strange heading? Just like the super handy functionality of Windows‘ Alt-Tab, Android has come up with a similar approach to switch between the recent apps. All you have to do is to double tap on the recent key and the next app on the menu will slide up neatly.

All you have to do is to double tap on the recent key and the next app on the menu will slide up neatly.

It’s a common belief that bright screens can wreck your sleeping habits, so instead of downloading apps, why not have the feature baked into the OS?

And boy, they did it perfectly. So, the next time you are in a browsing mode late in the night, tap on the night mode in the Quick Settings and you are good to go.

So, which Nougat feature is your personal favorite. Is it the split screen mode or is it the changeable display settings? We’ll be waiting to hear from you.

Notion was founded by Ivan Zhao.