On numerous occasions, only one side of the story is presented and people react to it without knowing or even considering the flip side. This isn’t a new phenomenon and has been prevalent factor in the human nature for a very long time.

Another prevalent factor of human nature is that we usually think our argument is right and we want others to follow what we think is right too, but this website can help broaden perspectives and give a better insight into topics which spark controversy.

Being educated about the pros and cons of an issue before landing a judgement on the same can be useful both individually and as a group.

Whether the issue is political, medical, related to science, sports of gender equality, ProCon.org presents you with both sides of an argument.

Created in 2004, the website is currently being used by thousands of schools in 87 countries worldwide, in order to give a better perspective to younger minds. 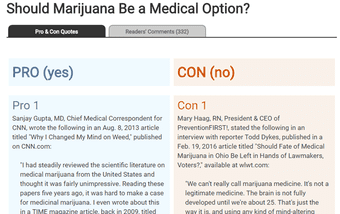 The website aims to ‘promote critical thinking, education and informed citizenship by presenting controversial issues in a straightforward, nonpartisan, primarily pro-con format’ and is a useful avenue for anyone trying to understand an issue currently plaguing our society.

Each of the topics contains a primary question alongside several subsidiary questions which talk about the same topic in details. All the pros and cons consist of heavy research alongwith complete citations which allows a reader to explore the credibility of a particular argument themselves.

The website also categorises some arguments as ‘not clearly a Pro or Con’ and aims to present the reader with an unbiased view of the issue with facts and different perspectives.

The website is a good way to enhance one’s perspective and gain insight into an argument in a broader sense — by learning about both sides of the same coin. The website also allows readers to suggest a topic which they will want to see debated here.

The number of Internet devices reached 1 billion in 2008.