After much adieu, Netflix users will now be allowed to download their favourite TV shows and movies which can later be watched offline, and this isn’t going to cost you any extra bucks. Amazon Prime already has this feature for most of their videos.

The company recently announced that they’re adding this feature after gauging user response as many of their subscribers wished to watch shows and movies while travelling, especially during long flights where getting an internet connection isn’t possible.

This feature, however, won’t be available for all the shows in their catalogue but only a select few.

Just update your Netflix app on iOS or Android, and you’ll see a download button on the details page of selected shows as shown in the image below. 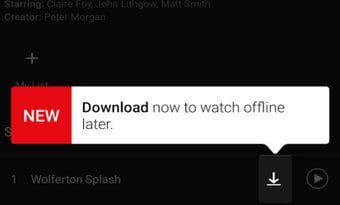 This button helps you save videos to watch later on when you’re without an internet connection. The download feature was also launched by YouTube in India last year.

Netflix has basically done this to counter Amazon Prime’s expansion in India, as internet connection in the country isn’t always stable, so the download feature works wonder for people commuting to-and-fro from work.

The company has mentioned that shows like Orange is the New Black, Narcos, The Crown and many others are available for download already on the platform.

Although earlier the company had no plans to offer an offline streaming option to its users, but because their rival company Amazon Prime was already offering this feature and heavy demand for it from the subscribers, the company succumbed.

The longest video on YouTube is more than 570 hours long.