Personal care and cosmetic products(PCCPs) are a huge part of our lives. From toothpaste and deodorant to shower gels and makeup; we use these products daily as part of our personal care regime.

We use these products to look our best and they are quite effective at helping us achieve this. But what if I told you that these products which we treasure so much might be harming the environment?

Specifically in this article the focus is on microplastics contained in PCCPs. Many PCCPs contain a considerable amount of plastic particles(excluding the plastic they are packaged in). These particles although useful have been identified as an environmental hazard.

In fact, research at Plymouth University has shown that as much as 100, 000 miniscule plastic particles could be released with the usage of products containing microplastic particles.

Knowing this, you will no doubt have further questions. What are microplastics? What is being done to prevent harm to the environment? We will be exploring these questions and more in this article.

What Exactly Are Microplastics?

Several terms are used to refer to microplastics such as microbeads, microspheres, nanospheres and microcapsules. Microplastics however is a more general term which ignores the shape of the plastic particle and focuses only on their size.

The United Nations Environment Programme identifies the characteristics of microplastics in their publication Plastic in cosmetics: Are we polluting the environment through our personal care. They are:

Several terms are used to refer to microplastics such as microbeads, microspheres, nanospheres and microcapsules

Microplastic use has lead to a great deal of innovation in the PCCP industry which is in itself a multi-million dollar industry globally. This has no doubt aided in the proliferation of microplastics.

Microplastics are used for a variety of purposes in PCCPs. They are used for purposes such as exfoliation, as agents to aid in film formation, viscosity control, for aesthetics and as bulking agents just to name a few.

Based on the material a microplastic is made from as well as its size, it can be tweaked in order to make it more suitable for a particular purpose.

The most common method of introducing microbeads into the environment is through waste water. After being applied, in many cases these products are eventually washed down the drain. This can be considered the beginning of the problem with microbeads in a way.

Firstly, although in many countries waste water is first treated at waste water treatment facilities, the filtration devices at these facilities are not fine enough to filter out particles on the order of millimeters.

This means that in countries where wastewater isn’t treated, these microbeads also find their way to bodies of water such as our lakes, rivers and oceans.

To make matters worse, some PCCPs contain as much plastic added as ingredients as the plastic they are packaged in. Whereas packaging can potentially be recycled, this is not the case with the contained microplastics.

Due to the small size of these particles, removing them from the environment would prove quite challenging without causing subsequent damage to the environment.

In the same publication stated above, the United Nations Environment Programme also states that there have indeed been laboratory experiments which have demonstrated the negative effects of microplastics on marine organisms.

There is also evidence to suggest toxicity in mammals(including humans) as well.

One of the more troubling environmental concerns is that microplastics can act as transport mechanisms for harmful chemicals. These could be consumed by marine life such as fish which would harm them. The marine life could then quite possibly be consumed by humans also to their detriment.

One of the first important steps that should be taken in order to deal with the problem of microbeads/microplatsics in the environment is to inform consumers on the possible hazards of microbeads.

Beat The Microbead is leading the progress in this area. Their website has lots of information pertaining to microbeads and the products they are found in.

Beat The Microbead is leading progress in this area. 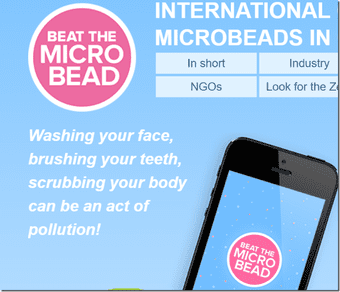 With this information, consumers should be able to make an informed decision on whether they want to continue using products which contain microplastics.

In fact, two Dutch NGOs in collaboration with UNEP and the Environment and UK based NGO Fauna & Flora International have released a smartphone app which allows consumers to identify products which contain microbeads.

This app also bears the name Beat The Microbead and is available for Android, iOS and Windows Phone. 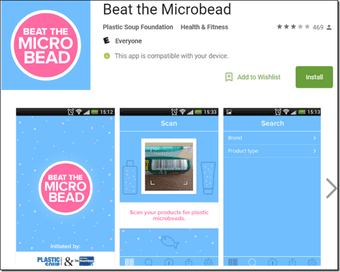 Beat The Microbead(the organization) has also launched an initiative called Look For The Zero where manufacturers identify their products as containing zero microplastics. 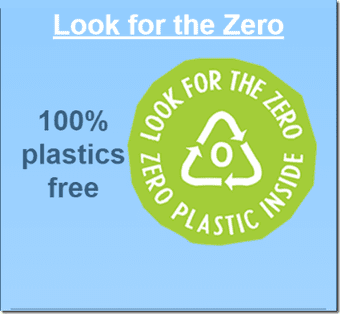 Voluntary Removal or Substitution By Companies

Companies such as Procter & Gamble have also made pledges to phase out microbeads.

Product manufacturers should also consider using/developing biodegradable components to carry out the functions which microplastics carry out in consideration of the environment. For example materials such as apricot husks can be used for exfoliation.

There is also the option of equipping waste water treatment facilities with filtration devices capable of filtering microplastics. Unfortunately, significant levels of investment would be needed to achieve this.

All of these steps however are not as effective as an outright ban of microbeads. Implementation could take a while to be realized however.

This is understandable as the required legal framework should first be put into place before this can be achieved.

While this may be the case, you should note that there has been some progress made in this area. For example, the UK has announced plans to ban microbeads in personal care and cosmetic products by 2017. Other countries have also announced similar plans.

Finally, more research needs to be done with regards to the effect of microplastics on the environment and as to just how toxic they are to the environment. As we have seen, great strides have thankfully been already been made in this direction.

Although microbeads are effective at their intended roles in PCCPs, they are affecting the environment. Based on this their use should be phased out. Steps are being taken toward this already but more needs to be done in order to fully realize this.