There are quite a few social media applications out there with each adding their own flavor to the mix. Yik Yak is a relatively new application in the social media arena having been founded in 2013. It allows users to create and view messages anonymously within their ‘community’ which is defined by a 10-mile radius.

What is Yik Yak?

In order to begin using Yik Yak, users are only required to provide their phone number on their mobile device. They can then begin posting.

Yik Yak is anonymous, in the sense that it does not record or display any personal identification. However, when signing up, users create a handle. They can choose to make posts or ‘yaks’ with or without the handle.

The ability to post pictures is present but only those that do not contain faces.

Users have a variety of options when viewing yaks. For instance, you can choose to view only those which are in your local community.

Alternatively, you can view Yaks which fall under the following categories:

You can even carry out a search to find yaks from locations which you specify.

Within the app’s settings, you can choose to enable the sharing of yaks with friends as well as the ‘My Herd’ option. ‘My Herd’ allows you to more easily identify the particular community you fall under. In addition, you can set a pin code in order to protect your yaks.

If you wish to use the web client on your desktop, you will first need to authenticate this activity using your mobile app. You will be provided with an authentication code which you will need to enter into the web client.

You can also view the top yaks in your area as well as other top yaks. 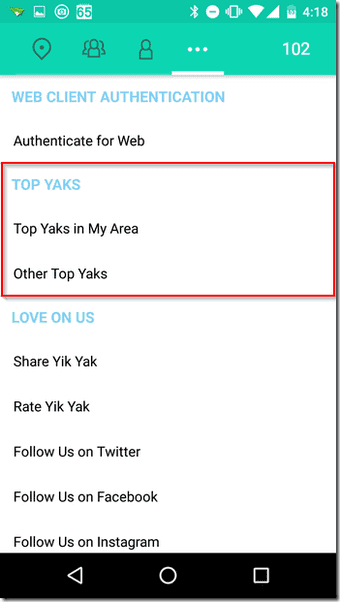 One of the more interesting and original aspects of Yik Yak is the concept of Yakarma.

Yakarma is a measure of how active a user is on the application. Posting yaks, voting on and replying to yaks, as well as sharing yaks gains yakarma.

Bullying seems to always pop op on apps which masks the user’s identity. Unfortunately, Yik Yak has not been able to escape this plague. However,the company has shown initiative with a system which filters out negative posts. There is also the voting system on yaks which ensures that if a yak receives enough negative feedback it will be removed.

The appeal of Yik Yak is that it allows users to communicate with others about diverse topics without having to know the persons they are interacting with.

This means that persons have the opportunity to converse with people they might not have normally. The app is currently mostly popular with university students.

Yik Yak has a solid user base so far and although it has failed to reach growth targets in recent times, it does offer a fresh approach on social networks.

With the implementation of features such as private chat, the company’s executives are again showing initiative in trying to keep the app as relevant as possible.

Yik Yak is definitely an interesting take on social media and you guys should check it out if this kind of thing appeals to you.

ALSO READ: GT Explains: What is Peach and What Should You Know About the New Social Network?

Shazam identifies songs based on spectrogram.