We get it, Microsoft wants us to upgrade to Windows 10. However, that free upgrade is putting up pop-up reminders and taking space on your hard drive. A polite “No, thank you” doesn’t make it go away. GWX Control Panel fixes that problem.

Why Would You Want to Wait?

If you’re using Windows 8.x, Windows 10 isn’t that much different. Windows 7 users will see it as a major change. Windows 10 isn’t compatible with all hardware and software. Other people have privacy concerns with the new operating system. Whatever your reason, it’s your computer and your choice. Microsoft pushed the Get Windows 10 (GWX) along with other Windows security updates.

Attempts to uninstall the updates don’t always work, GWX comes back. Antiviruses won’t block it even though it acts very much like a Potentially Unwanted Program (PUP).

Want to take Windows 10 for a test drive? Try an imaged backup first, dual boot, or a virtual machine.

GWX Control Panel is a free program from Ultimate Outsider. I recommend donating a few dollars if this saves you time and hassle. Remember to download the program directly from the Ultimate Outsider page. If you search for this program, you might go to a third-party site that includes some malware or other annoying attachments with it. 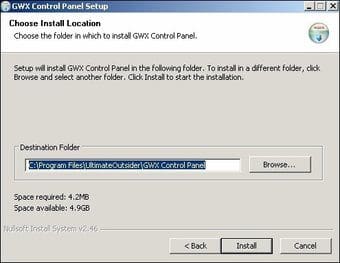 You’ll have a choice of two different versions of the program: stand-alone or installer. The stand-alone is great for safe mode. Once it disables GWX you may not need the program again. I recommend the installer version. As Microsoft gets more aggressive in pushing Windows 10 on people, you may need GWX Control Panel to block it again.

The installer version has some options to update and monitor for changes by Microsoft.

After authenticating the user, the first thing the program checks for is if the GWX app is installed and running. That’s handy for novices who may not know if they need to block Windows 10. This also helps prevent malware since some programs pretend to be the Windows 10 upgrade.

If it’s just the GWX that’s annoying you, Disable ‘Get Windows 10’ App (permanently remove icon)’ is all you need. That prevents the reminder from sitting in your tray and periodically encouraging you to download and install the upgrade. 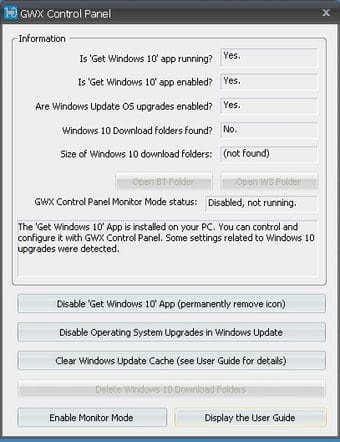 In some installations of Windows, Microsoft changed the Windows Update control panel to Upgrade to Windows 10. That’s a dangerous option for people who want to wait on Windows 10. It makes you think the only way you can run Windows updates is to upgrade. That’s not true.

GWX Control Panel will monitor for any changes in the GWX app and the Windows 10 suggestions. I haven’t seen any compatibility problems with it, but if you’re concerned the Disable Monitor Mode stops GWX Control Panel from running. If that’s a concern for you, it’s probably easier just to run the stand-alone mode.

Before you do the install, create a system restore point. There is always a risk when changing your Windows install. That system restore point lets you back out of any change. I suggest the installer mode of the program. With Microsoft constantly making changes, GWX Control Panel needs to be running in Monitor Mode for those changes. Go ahead and disable the Get Windows 10 App.

Windows Updates is an unreliable program, so I am afraid to make changes to it unless absolutely necessary. I have plenty of hard drive space, so there is little risk or concern with those Windows 10 files.

If you remove GWX, you can still upgrade to Windows 10: You can create a bootable ISO or use Microsoft’s Media Creation Tool to do a direct upgrade.

The monitor mode should let you know if Microsoft secretly re-enabled or downloaded the GWX app. The developer pushes out new updates to the GWX Control Panel app when Microsoft changes the Windows 10 update options.

Since this isn’t supported or authorized by Microsoft, don’t be surprised if it’s not 100% effective. Each Windows install is slightly different and Microsoft holds all the cards here. They want to push the upgrade to you, so GWX Control Panel needs to keep up.

Hopefully, Microsoft will stop bugging users after August 2015. That’s when Microsoft is scheduled to stop offering the upgrade for free.