Even with a cellular data plan, iPads can’t natively send an SMS. That doesn’t mean you can’t chat with others by SMS. It requires a little configuration on your iPhone or a third-party app.

Your Best Bet: Continuity With Your iPhone

If you have both an iPhone and iPad running at least iOS 8.1, that’s all you need to send and receive SMS messages on your iPad. Even though you’re on your iPad, people will see those messages as if they were on your iPhone.

The weird part of this setup is that you do it on your iPhone, not your iPad. When you think about it, this makes sense. Your iPhone is relaying the messages to and from the iPad. For this to work, your iPhone and iPad need to have the same iCloud account setup on the devices.

On your iPhone go to Settings -> Messages. In the middle of the screen you’ll see Text Message Forwarding. Tap that setting and you’ll see a list of potential devices that can relay messages. 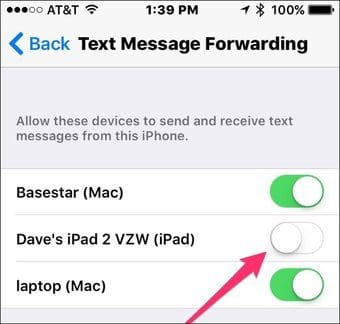 I already have two Macs configured for SMS’ through the Messages app. Apple puts in the destination (Mac) so you know these are MacOS systems. The middle device is an iPad and I have Text Message Forwarding turned off.

Not Sure How to Set Up Your Mac for SMS? Check out our guide.

When I switch it on, Apple sends a code to my iPad that I need to enter on my iPhone. That’s for security reasons. Once you enter that code, SMS messages will show up on both your iPhone and iPad. Then you can respond to them like you would any other messages. 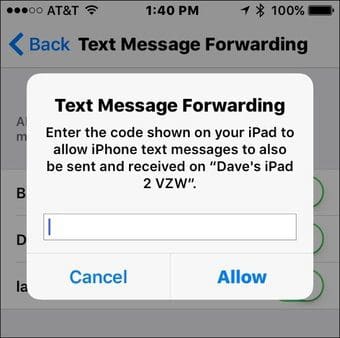 Limitations And Warnings For Using Continuity SMS Relay on the iPad

Since your iPhone is relaying the messages, it needs to be on and connected to a cellular network. If, for example, your iPhone is in Airplane mode, then SMS relay won’t work. That’s a bummer when you’re on an airplane. You might have a data connection, but unless your phone has a cellular collection, you won’t have the relaying.

The iPhone and iPad don’t need to be near each other or on the same WiFi network. Your iPad needs to be connected to the Internet though. This connection can be through a wireless connection or cellular data connection. If you use your data connection and have a data cap, messaging will count in your data plan not your texting plan. If you get lots of text messages with attachments, you may want to turn off this feature. 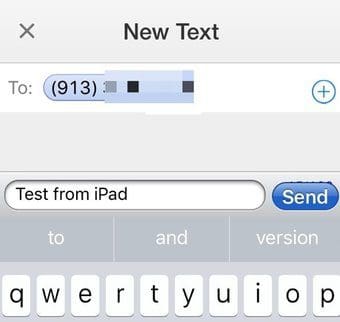 Want a Google Voice app for the iPad?: Try GV Connect. It’s $2.99 but is fully optimized for the iPad.

Other iPad Apps for SMS/MMS Messaging

I tried a few of these alternative apps. They give you a phone number and the app acts as a gateway to your iPad. FreeTone and nextplus work great for not just text messaging, but phone calls as well. You get a few free messages for signing up. After that, you can pay a monthly subscription, buy a bucket of messages or watch ads/respond to offers to get more free credits. I don’t like this option with yet another phone number; that’s why I prefer keeping it within Google Voice. 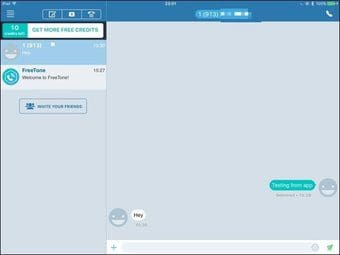 Try WhatsApp: It’s a handy alternative to Messages and we compared to the two apps.

Just because you’re on your iPad doesn’t mean you have to miss out on text-based conversations.

Ray Tomlinson is credited as the first person to send an email message.