When we are comparing our Android to an iPhone, one of the strongest points that we argue is on the power of customization. Android is known for the level of customization one can do to make their phone stand out of the crowd. Wallpapers, themes, widgets and custom launchers, you name it. With the right set of apps installed, you will never grow old of the looks on your Android.

Changing a wallpaper or creating a custom widget is just like scratching the surface of the endless world of customization. Did you know that you can even change your Android’s boot animation if you have root access on your device? It’s very easy to achieve it and if you love to make your phone different from the rest, this is what the missing secret ingredient is. So let me show you how it can be achieved.

Note: Before we begin, I would advise you to take a Nandroid backup of your phone just in case. The process is fairly simple, but then we have Murphy’s 4th law. Also, some Samsung devices might not be compatible with this trick on TouchWiz ROM. But if you have a custom ROM installed, nothing like it.

This is a manual method in which you have to download the boot animation file form the internet and then replace it with the one you have on your phone. You can search and download the boot animation from various online repositories. Here’s a link on XDA to get started. Just make sure you download the correct resolution file. Most of the files that you download will be named as bootanimation.zip. But if that’s not the case, rename the file and transfer it to your phone.

One last thing before you reboot would be to fix the file permission. Long tap on the new bootanimation.zip file and change the permissions to rw-r—r—and save the settings.

Now when you reboot your phone, you will have your new android boot animation ready for you.

Using an App, The easy way.

For those who loves the food served on the table, rather than making a meal for themselves, there’s always an app for them. Boot Box is a simple app for Android using which you can search, download and even applies boot animations on your phone quite easily. The app also gives you a fix for devices like Samsung in which boot animations are saved in .QMG format. 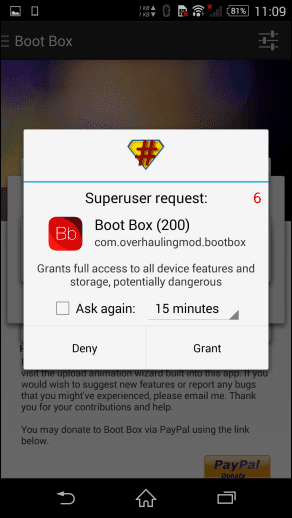 After you install the app, it will detect your phone’s native resolution and ask you to select the download resolution for boot animations that fits best on your device screen. Following that, you will be given the option to back up the current boot animations you have. This is the moment you will be asked to grant the app root access.

Once everything is in place, you can browse the catalog, preview the boot animations and install them as per your choice. Things can’t get easier than this. One cool feature about the app is the scrambler that randomizes boot animation each time you boot your device. Pretty cool! Right?

So that was how you can apply custom boot animation on your Android smartphone. HTC devices must have their bootloader unlocked and Samsung users need to take some necessary precautions before trying out the trick. If you have any doubts about the process, I would advise you to take it up in our forum before changing any boot animations.