For the past couple of months, we have seen a lot of apps that make the transfer of files between smartphones a breeze. Apps like SHAREit and Feem save an iPhone user like me from embarrassment when a friend on Android asks for a couple of photos from their camera roll. 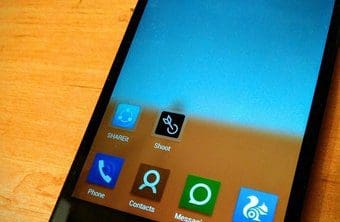 Shoot from Bittorrent, an all-new app based on the same concept, recently joined the party. The app is dead easy to use and you won’t require a walkthrough on how to send and receive the files with it. But then there are questions as to how feature rich it is when compared to its peers. So let’s take some of these points into consideration and compare it with SHAREit.

The UI of Bittorrent Shoot is very simple and minimalistic. On the home screen of the app you have two buttons. One to send the files and another to receive them. After you tap on the send button, you get the option to choose the photos and videos you wish to forward. There are three views, one collective view of photos and videos and two individual views. Apart from that there’s nothing to explore in the app.

When compared to Shoot, the interface of SHAREit is a bit advanced, but still you start with the option to send or receive the files. When you click on the Send option, you get to choose from different categories. All the photos and videos are listed in the respective tabs from where you can select files to transmit. You can choose from different categories before initiating the transfer.

It’s a Tie: SHAREit might have a more complicated user interface when compared to Shoot, but then you get more control on what is being transferred. You also get your transfer history along with the total bandwidth consumed in transferring the files. But if you want to go simplistic, Shoot does it better.

iOS, Windows, or even Android – Shoot can transfer only images and videos from one device to another. Currently there is no option to include contacts or personal files in the transfer, but the developers have promised them for future releases.

Depending upon the OS of the sending and receiving smartphones, the items that can be transferred differs. For iOS and Windows, you can send photos, videos, and contacts. But if you are transferring between Android, pretty much everything can be copied including apps installed on the device. SHAREit offers a provision for Android phones, which can completely clone your old phone to a new phone.

Winner: SHAREit. Without a second thought, I can clearly say that SHAREit is the winner when it comes to supported files. With Shoot, contacts and apps transfers (in the case of Android) are not available. Shoot needs to come a long way to match with the former.

Shoot requires an internet connection to transfer files from one device to another. The sender generates a QR code that needs to be scanned by the recipient. The transfer is initialized instantly. The files are not uploaded to the server, but they use the peer-to-peer transfer technology (P2P) for instant transfer. But remember, these transfers require you to be connected to an internet source (Mobile data/Wi-Fi).

Note: There’s an option in Shoot’s Settings menu to restrict the transfer of files when the phone is connected to your mobile data.

SHAREit also works on peer-to-peer technology, but only on a Wi-Fi connection. There’s no internet access required as the files are transferred using a local wireless network and it’s mandatory for both the sender and receiver to connect to the same Wi-Fi network. Though there’s no option to transfer over the internet, but you could make one phone into a portable hotspot and connect the rest of the devices as a viable option.

Winner: SHAREit. Shoot markets itself as an app to transfer big files, but I am not sure how one can achieve that quickly over any old internet connection. There are many users who don’t have a fiber wire digital internet connections and the upload rate is always a concern. But for SHAREit, no matter where you are, you can transfer the files without a second thought.

While Shoot gives a 3-transfer cap before the user has to purchase it for $1.99, SHAREit is free, without ads for unlimited use. So we know for sure who the winner is.

Which One Will I Pick?

Without a second thought, I’m going with SHAREit. It clearly offers better features, the option to connect using a hotspot and to transfer files even without an internet connection. And of course SHAREit’s story doesn’t end with only photos and videos, like Shoot. It’s just the beginning. Bittorrent Shoot has a long way to go before it can compete with SHAREit and I would love to see that happen. But that’s just me, don’t forget to share your opinion in the comments.

The Apple A12 Bionic is the world’s first commercially available 7nm chipset.