We talked about using multiple monitors in Windows 7 recently. Multiple monitors let you easily separate your desktop into two different zones. The role of virtual desktop managers is similar, except that the zones are created within the same desktop (and a single monitor).

A virtual desktop manager creates different desktops within the same desktop and lets you switch between them easily. Each desktop is sandboxed and whatever you do in one desktop will not affect the second or third virtual desktop.

Dexpot is one such powerful virtual desktop manager. If you are a Windows 7 user then it gives you some extra features to operate virtual desktops. This tool comes with SevenDex plugin that takes advantage of the Windows 7 taskbar thumbnail feature, and displays thumbnails of all the desktops when you hover your mouse over the Dexpot icon in taskbar.

You can customize the look and feel of every single desktop and easily locate the items on them by using its thumbnail feature.

Download and install in on your computer. Check your system tray for its small icon. Right click on it and you will get a bunch of options. Let’s check them one by one. 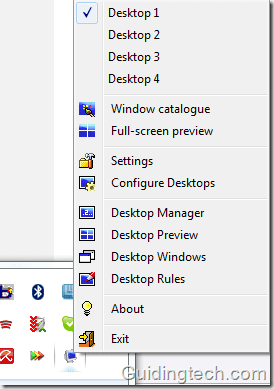 Dexpot comes with 4 default Desktops. You could increase the numbers up to 20 desktops (that’s huge by the way and would require a powerful hardware configuration too).

By clicking on Desktop 2, you’ll be redirected to another desktop. It would look like Desktop 1 because it has the same wallpaper and icons as desktop 1(later you can change the look and feel of every desktop according to your choice) but you won’t see any programs in taskbar as it is a new desktop altogether.

You can run any program and it will not affect the programs in desktop 1.

This is one of the coolest features of this application. Click on it and you’ll be surprised by some special effects. The desktop wallpaper darkens and all the running applications appear on the desktop. You can click on any of the applications to instantly switch to it. Also you may move to other desktop by clicking on small arrows present at the top. Instantly switch to full screen view. It will display all the four desktops in a single full screen. Clicking on any of those screens will take you to that desktop.

On the Settings panel, you can see the different tabs on left (total 6 tabs). Click on each tab to get the corresponding settings. You can set the number of desktops, make new profiles and do much more. 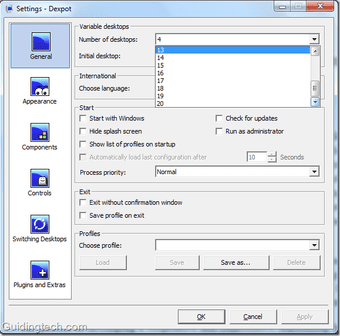 Switch to controls tab to decide the keyboard shortcut of various functions. For example of you have to switch to Desktop 2 then just press “Alt+1” of your keyboard. Similarly you can decide keyboard shortcuts for move window, copy window, transparency etc. 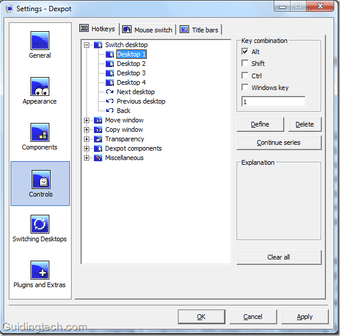 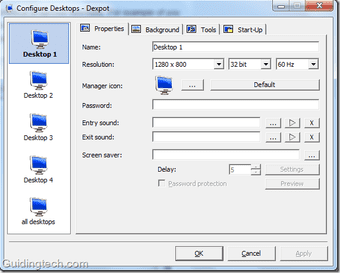 It will show four icons having numbers. If you want to switch to desktop 2 then click on icon with number 2. Similarly click on other icons to switch to other desktops.

How to activate SevenDex plugin

You don’t need to download any plugin. Just right click on Dexpot icon in the system tray, select Settings. Go to Plugins and Extras. In the plugin boxcheck the box next to SevenDex. Click OK.

Though I tried to cover all the basic and important feature, there are many other features that you would discover once try this tool.

Overall, it is one of the best virtual desktop managers around.

YouTube originally started out as a video dating site, inspired by HotorNot.