As a diehard movie freak, I really go through movie reviews either on the web or in newspapers. It often means the difference between saving money and saving a weekend. But reading through multiple movie reviews of the same movie often gives away telltale clues of the plot. That’s why I sometimes favor short movie reviews.

Some I get to read that via Twitter or Facebook status messages. Then there are niche websites that give short movie reviews. Here are three for your movie watching pleasure. (Btw, we’ve also covered sites that show movie charts in case you’re interested)

GINQ is a movie review website for the Twitter loving crowd. That means, you get short and sweet 160 character assessment of a movie instead of a rambling tale of how the director was inspired to make his new magnum opus and the various meanderings of the screenplay. It is also a social movie review site with a community of movie loving people behind it.

Every member gets to review and rate movies, and share it with their friends. Each movie gets its own page – you can enter your critical review in the comment box in 160 characters or less. The page also links you to other well-known movie sites like IMDb, Rotten Tomatoes, and TMDB. You can compare how the movie has been rated on all these sites along with GINQ’s own rating. Rate your favorite movies, build your lists of movies you plan to watch and share it all with friends.

Four word movie reviews or FWFR for short. You can’t get briefer than this. The site’s avowed intention is to keep movie reviews as short as possible, but even then when you glance through the nearly 40,000+ movie titles on show, you can see that four word reviews work just as well.

Movie reviews are themselves top-voted by the community. Each movie page displays an assembly of these reviews which help you to get a cross-section of views at a glance. You can see the films that are trending at the U.S. box office. Each movie page also lists the entire cast and crew. These too are hyperlinked to the films they have done individually. Films are ranked according to a score. 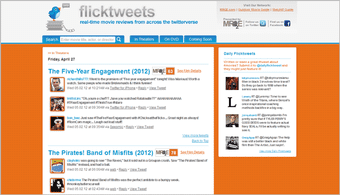 As the name indicates Flicktweets is a movie review site that collects viewers’ opinion from across the twitterverse. Flicktweets covers all genres of films including DVD releases. Flicktweets is the sister site of MRQE.com, the Movie Review Query Engine. So, each movie review includes the MRQE Critics’ Graph and Metric Score which are like weighted average ratings of critics and movie watchers.

A Flicktweet review is a simple real-time listing of Twitter opinions expressed by moviegoers. So, you can have all sorts of tweets on a movie, not necessarily a critical review. But it’s nice to listen to what the Twitter crowd is talking about.

What sort of value do you place on short movie reviews? Do you have any other movie review site in mind that talks about movies concisely?

There are over 7,000 hours of full-length movies on YouTube.