We tend to carry our smartphone with us almost everywhere we go, and these aren’t those old and ugly phones that you won’t go berserk on losing. Your smartphone is now home for most of your personal data like photographs, credit card numbers, passwords and other such sensitive information, and with the increase in the number of malware every day, securing the phone is now as important as securing your computer. We’ll talk at length about securing your Android phone in this post.

There are many of these apps on Google Play store today that claim to provide data and anti-theft security but there are only a few which provide comprehensive all round protection you can trust almost blindly.

I have chosen three of the most powerful apps you can install on your Android device in order to protect your data from intruders. Let us see how they work.

Note: We discuss 3 apps below and it is important that you install and use only one of them at a time to avoid conflict and other issues with the phone. We want to make sure you have options before you go ahead and choose the one that’s right for you.

Lookout is one of the most acclaimed and trusted names when it comes to Android security. The app has all kinds of protection features like Antivirus and Malware Scanner, Anti-Theft, and Backup and Restore. So let’s have a detailed look at them one at a time.

a) Antivirus and Malware Scanner 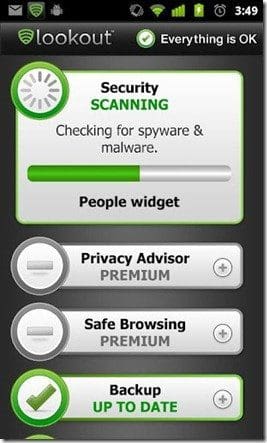 The application always runs in the background (takes negligible memory and battery) and scans all the apps you install on your device for malwares to make sure your device is always protected from hackers and intruders. You can also create a scheduled scanning profile to force scan your device from time to time.

b) Locate the Phone

The locate phone feature helps you find your phone when you misplace it (even if it’s in silent mode) or if someone steals it. For the former problem, you can remotely command lookout to turn on the siren sound on your phone. It’s a handy feature to quickly find the phone when you’ve misplaced it somewhere near.

The second feature on the other hand lets you find the phone on Google Maps (approximate location) using a PC or another smartphone to make sure you can take necessary steps before your device battery runs out.

This simple feature lets you backup your device contacts on the lookout servers and lets you restore them if you loose them for any reason.

These were the list of features a user is entitled to in the free version. If you go for the pro version, you get features like Sandbox browsing, Remote device lock and wipe, Privacy adviser and Advanced backup.

I trust Avast security on my personal computer, and my faith in it extends to my Android as well. Avast! Mobile Security is another all round security app for your Android phone but unlike the former, it doesn’t differentiate between a free and a pro user, and if you have a rooted device, the app brings in a set of new and innovative features.

The Antivirus and privacy protection feature works more or less similar to Lookout, but what’s noticeable is Firewall, Anti-Theft and Stealth Mode, and Remote Control. So lets check them out. 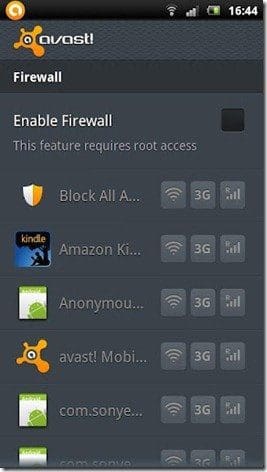 This feature works only on a rooted device, and with this you cans control the web access permissions of individual apps installed on your system. You can also limit the data usage to Wi-Fi and 3G.

b) Antitheft and Stealth Mode

These two features (this one and the previous one) go hand in hand and once both are enabled, the app icon is hidden or replaced by dummy app in the app launcher tray making it difficult for the thief to locate and uninstall the antitheft feature of the phone.

You can remotely control your phone and can do tasks like sounding a siren, deleting private data and locking the device.

Moving on to the third and final app.

Though one of the two apps above is enough to address all your security concerns, Norton is a trusted name worldwide, and hence taking a look at what they have to offer for Android won’t harm. Norton Antivirus & Security for Android provides all the usual security features like Antivirus and Malware protection, Anti-Theft, Web Protection and Remote Lock, and is at-par with both the apps we discussed above.

We won’t go deep into this one because it works more or less the same way the other two apps do. So check it out and see if this one fits the bill better for you than the previous apps.

Nothing in the world is 100% secure, and these apps are no exception. Yet, I assure you that they will provide the best in-class security for your device. So go ahead and install one of these apps. Yes, one only as I mentioned previously. But you can of course try one and then uninstall it and then try the other. Do tell us which one you finally opted for. Any other cool security app we missed? Let us know.

Your browser keeps a track of your system’s OS, IP address, browser, and also browser plugins and add-ons.